We Must Stop Them


Today I read this -


"It is true. All of us ordinary, annoying, scared, crazily

hopeful people are called upon to fight, together, the greatest

fight in human history....The fight is simple: to keep a planet

we can live on....Given an alternative, hey, who wouldn't

giant and complex -- has blocked alternative energy. The

fossil fuel industry, all of the oil companies -- Chevron,

Exxon, BP, Shell, etc., have decided that immediate profit is

more important than a world.

We have to stop them."


This is a great blog, please read it.


Posted by Brightspark Books at 10:24 PM No comments:

Some kind of moody rock and roll plays on the radio. A man singing aaahhh, whaaaa, and about building the future, guitars strumming, a loose steady beat. Sounds like people singing on a wharf at sunset but without the red sky at night, it could rain tomorrow. He says he's been waiting there so long....

The music puts me in mind of friends far away. We have a spare room here if anyone ever wants to visit. Meanwhile, I have stored various things in there for our next garage sale in February. Selling things you do not want from your front garden, garage, carport... is a wonderful way to meet the neighbours, lovely recycling and it's easy to weed, prune and plant while also flogging off unwanted items. This next garage sale, a friend from across the road and I plan to collaborate. If you want to sell anything too, let me know and drop it off here. Come along and sell it yourself on the day or donate to the recycling cause.

The music's playing on, it sounds so surf-like, rolling water.

Whenever I think of large bodies of water now I think of the Pacific Ocean. The months it took my ancestors to sail over here from France on the Comte de Paris, and on the Lady Jocelyn from England. After my own, (cruise) ship voyage across the Pacific I can see how adventurous they were to travel here. The Comte de Paris is shown below. It looks so small, think of those sails flapping in strong winds, tearing, having to be repaired on board.  The four or five metre swells they may've encountered, higher than my house, dips and troughs of massive water. What friendships they must've created in the stress and excitement.

My ancestor stopped at Napolean's grave on the way and took cuttings of willows there. He planted them along the Avon River in Christchurch.  They grow there to this day. Francois Leleivre saw the wisdom of planting trees and so did my grandmother on the other side of the family.  Her father, a Ward from Worthing, England sailed out here with six children and his wife, then rode on horseback up the North Island to find land. They planted oaks there, near Cambridge, North Island, NZ,  and called the place The Oaks. It is now owned by another family but those oak trees flourish on the hill round the house.

On my parents' property they planted many fruit trees, a kowhai on the lawn, and my grandmother had already planted trees on their place over the road. She then went along the private road behind their place and put trees all along there. I grew up thinking trees were a normal and necessary part of life. Their sighing and strange movements in the wind on dark nights were supposed to make me run, run, run for the lit back door and safety in our house. Their lovely greening in spring or year round colour fitted the world so well, and when I climbed them those trees provided a sanctuary from a world of talk, people, neatness and duties. Trees have their own kind of order. The rough and smooth and flourish of them inspires and intrigues. Close to a tree, I always feel calmer, belief in the world's goodness is easier there.

We need more trees if this world is to be a decent place for human beings to live. Find a place in your heart for giving to others, you'll also find more happiness than is possible any other way. Give trees to Australia, they really need them. Also, if we pay for trees every time we travel then we are paying to soak up the carbon we produce in that jet plane, boat, car or train. It's a fine thing to take responsibility for our own mess. The more trees we plant too, the more likely the weather extremes will lessen, the more likely human beings could survive with a reasonable quality of life.

I've so far bought trees for Australia to cover the cost of my trip to America and back, and also, a collection of plantings for a place up North in NZ, for a long car trip I did recently. Those are both documented on this blog. If you google 'trees for travel' there are many links to investigate. My going vegetarian also saves massive amounts of carbon. The animals that were once bred and killed to feed me are no longer needed, their methane is not being belched and farted into the atmosphere any longer. The transport and refrigeration costs for them and their meat are not needed either.

Many links for Trees for Travel are here -
http://snipurl.com/25z00lt 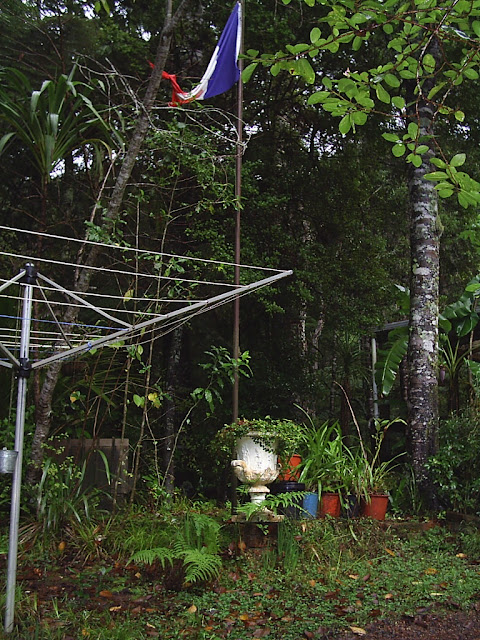 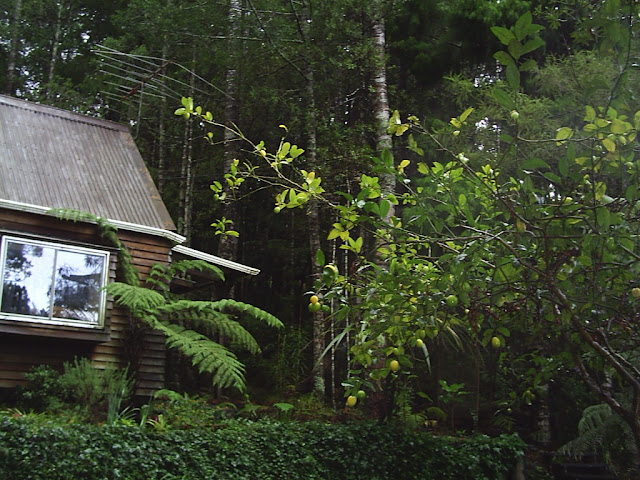 My fourth cousin in the Waitakeries told me so much about my ancestor, Leleivre who sailed here from France then had to hide where he was from. The prejudice those French people met here was a real trial.  If I ever read the poem, shown below, in public then some Anglophile people in the audience frown, glower, fold their arms, look away, annoyed. My great-aunts had the family moniker as their second name, so they carried it and my mother told us often about an ancestor who was a Frenchman and schoolteacher in the South Island, somewhere. We kept our history alive until we could investigate it more thoroughly.

The two photos above show my cousin's place, he co-incidentally lives with an old friend of mine, they fly the French flag on their property.

No matter what flag we fly or what politics we may believe in, we all need air to breathe and places to live which are as safe as possible. Planting trees, going vegetarian, recycling, taking care with resources and with each other, these all help the world to be a better place. Caring for each other means we also care for where we live and the quality of life generally. We deserve this.

All cheer and goodness to you, your families and friends in this festive season. Look after each other, in the end that's what always matters, every single day.